At the start of a cold winter, Chicago catches a Wave…

I’ve been caught up in the Korean Wave. And, I am beginning to suspect that all of Chicago has been caught up in it too….The Wave is a term coined in China for the trending of Korean culture across the globe. Just as my suspicions took hold that a trend was afoot, it became official. I mean, I do consider a mention in Bon Appetit official, don’t you!?!  Anyway, they just named  Korean cuisine as one of the biggest trends of 2011.

Further engulfing me in The Wave, I was lucky enough to land an invite to an enchanted evening with The Consul General of Korea at a “Taste of Korea” dinner  at Rolling Meadows’ Woo Lae Oak.  Bloggers and cultural foodies were in attendance, enthusiastically dipping into sweet pumpkin porridge, kimchi three ways, and spicy vegetarian radish rolls.  As I drove home, my thoughts began to turn to ways to incorporate the great flavors, spice, and health properties of Korean cuisine for our catering clients who hunger for a vibrant taste sensation to get through the Winter.

Whether we were aware of it or not, it seems that our team at Entertaining Company has been riding The Wave for some time. The classic flavors of Korean food, bright pickled vegetables and spicy barbecue are festive in nature and perfect for entertaining.  Recently, one of our clients, a Korean grandmother of a young soon-to-be-mitzvah-ed man, shed tears of culinary happiness at the tasting for her grandson’s Temple Sinai Mitzvah, where we were charged with blending the family’s Korean and Jewish food traditions for the celebratory meal following the ceremony. Calbi Chim short ribs anyone?  And then, there was Phil and Abby’s wedding at A New Leaf where hamish brisket of beef, potato pancakes and kasha varnishkes mingled on plates with Korean Barbecue of bulgogi and dakdoritang. I can’t quite put my finger on why, but there is something about Korean and Jewish traditional cuisines that are synchronistic and work so well together on a celebratory menu.

Well, following my amazing evening with the Consul, I am now infatuated with Korean flavors more than ever, and I can’t stop thinking of ways to use them for future fetes. Our Chef Shawn just wowed us with a Korean 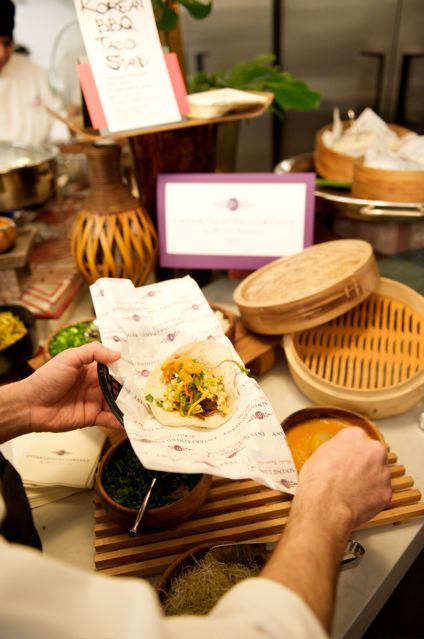 Barbecue Taco Stand  where guests can pile shredded spiced beef on to a warm corn tortilla with kimchi, daikon radish sprouts, bean sprouts, onion and Korean salsa. I have marked my calendar for dinners at  Hae Woon Dae and Urban Belly, and, I am staying connected with the Korean culinary community in Chicago online, having just joined the Hansik Chicago Group on Facebook and following @HansikChicago on Twitter.

Prepare, dear readers, to be swept away.  The Wave cometh.