Food is identity. It is culture. It is representative of our respective homes. Every pocket of every country in the world has unique customary dishes based around their humble staple crops. As custom caterers, we’re constantly in search of fresh, innovative ways to elevate dishes. But it all starts with the basics. Fruit, veg, whole grains—whatever’s around. How do we transform the basics into modern, event-ready food? Here’s our EC take on elevated staple dishes around the world. 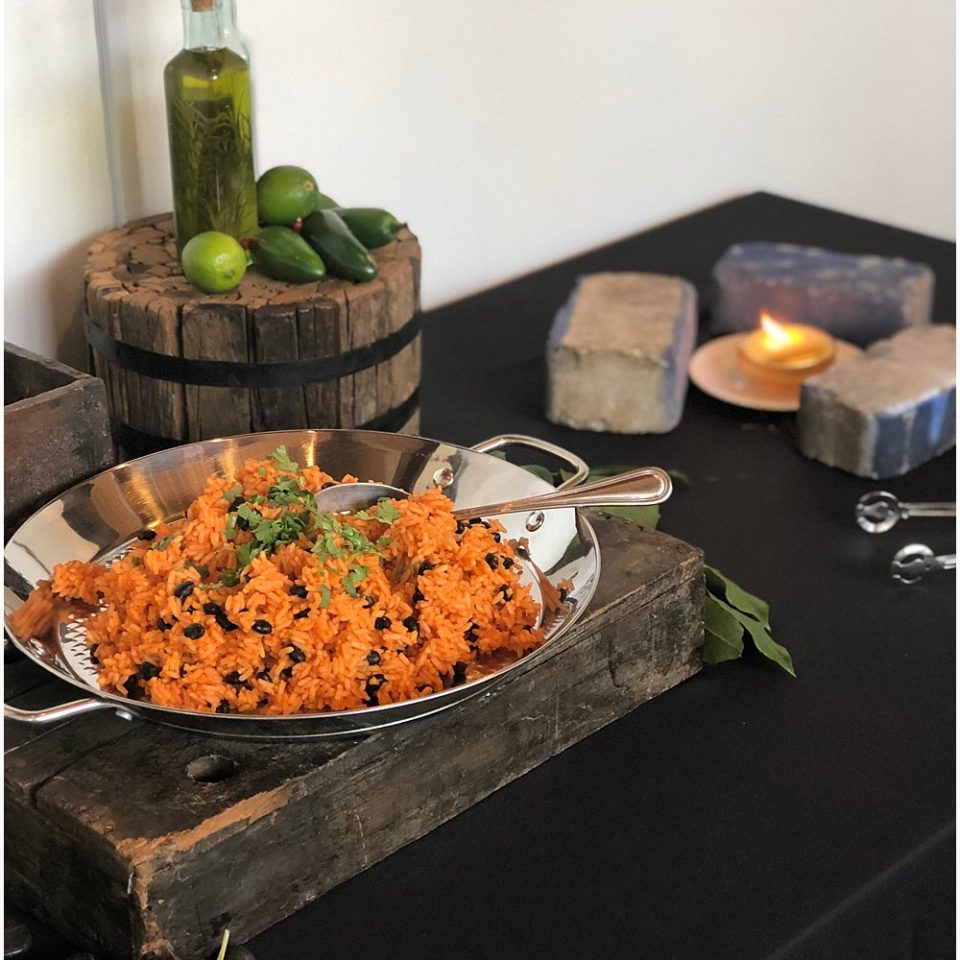 Arroz y frijoles is a staple dish all across the South American continent and throughout the Caribbean. Though it originated south of the equator, the dish eventually creeped up into the the U.S. South. Not only is it totally delicious and customizable, it’s also, like many staple cultural dishes, pretty darn healthy! Pairing brown rice with beans or lentils makes a meal with complete protein—one that’s got all our necessary amino acids. One of our favorite takes on rice and beans comes to us from Cuba: Moros y Cristianos. The name comes from the 8th century Spanish wars between the Moors (moros) and the Spaniards (cristianos).  When you add brown rice with black beans, it’s not only high in protein, it also has all the amino acids. This makes black beans and brown rice a complete protein. Nutritious and delicious. We served rice and beans alongside other Mexican and Indian classics at a fusion wedding tasting. To elevate the dish (literally), we displayed it in a sleek, silver serving dish and propped it up on a rustic wood block. We decorated the entire table with jungle-inspired leaves, rocks and other decor. Rice and beans as a dish needs no improvement—a sprinkle of freshly-chopped herbs atop the rice, and es perfecto. 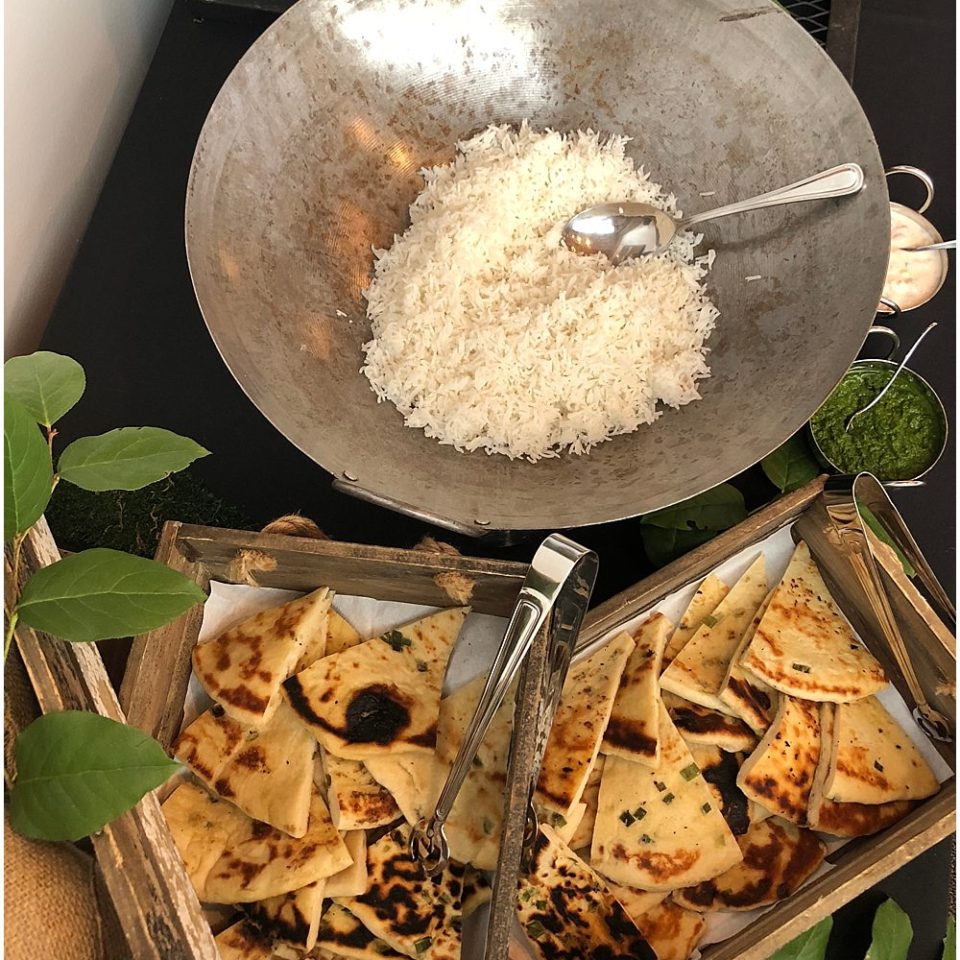 Warm, buttery and oh-so satisfying—Naan is a South Asian staple. It’s a leavened, oven-baked bread that made its way into India sometime in the 16th century and has been a mainstay since. Naan typically has an organic, slightly oblong shape to it (hand-stretched) and has charred bubbles along the surface, almost resembling a mini pizza dough sans raised crust. The inside of the bread should be soft, chewy and, well, bready. Though most grocery stores now carry at least a brand or two of packaged naan, the bread is traditionally cooked in clay ovens called tandoors. While naan is totally delish all by itself, it doesn’t hurt to serve alongside curries, kebabs, aloo gobi and other tandoori items. Our homemade naan is a hit with traditional South Asian families and adventurous Westerners alike! We served it alongside our arroz y frijoles at the Indian-Mexican buffet tasting, along with raita, chutney and classic basmati rice. What makes our naan so thick and fluffy is our use of yogurt, the secret to a fluffy dough. Plus, the slight acidity of the yogurt imparts a deeper flavor. Rice or naan? Both, please! 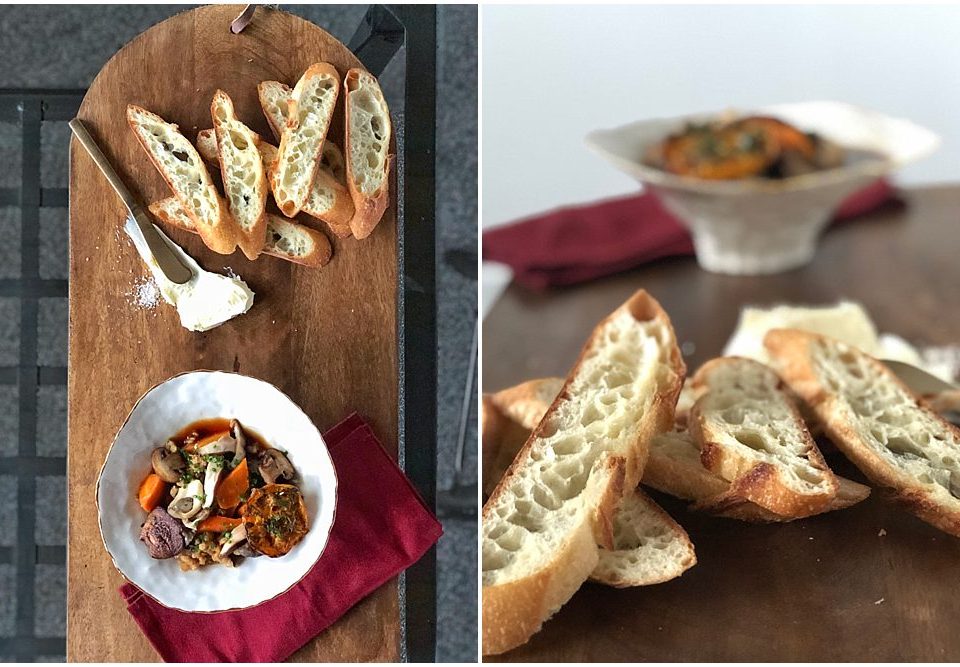 Shabbat lunchtime? We choose cholent! The original slow-cooked classic (maybe?) is a distinctly-Jewish stew that’s been around since the 12th or 13th century (!). Cholent is considered a staple Jewish dish (especially as an Ashkenazi Jewish food), as its cooking time. Religious tradition prohibits kindling a fire on Shabbat, meaning the soup could be started before Shabbat, allowed to simmer overnight and eaten after hours of cook time. Cholent is based around just a few simple ingredients—meat, potatoes, beans and barley. (These ingredients differ slightly depending on the region). Here at EC, we cater many a Jewish celebration, and, while we’re not a Kosher kitchen, we’re no stranger to cooking up Kosher-style food. The latest iteration of our Jewish menu highlights our effort to move in a “plant-forward” direction. So. We created a vegan cholent. We’re remain dedicated to keeping the ingredient list simple—we stuck to barley, beans and spuds, but added meaty mushrooms into the mix instead of an animal protein.