L’shanah tovah! For those who may not know, the Jewish community celebrates the Jewish New Year every September. This year, Rosh Hashanah (the New Year) began on Sunday September 9th and continued through Tuesday September 11th. The two-day affair commemorates the biblical beginning of the universe, and serves as an opportunity for us to reflect on the past 365(ish) days and ponder positively on the year ahead. One of the most important ways we celebrate is through food, with a traditional break-fast feast with friends and family. But are our traditions changing? With a societal shift towards lighter, healthier eco-conscious consumption, more and more of us are demanding plant-based options. Here at EC, we believe everyone deserves a seat at the table. So grab a plate, pull up a chair and check out how we planned for a vegan Rosh Hashanah celebration. 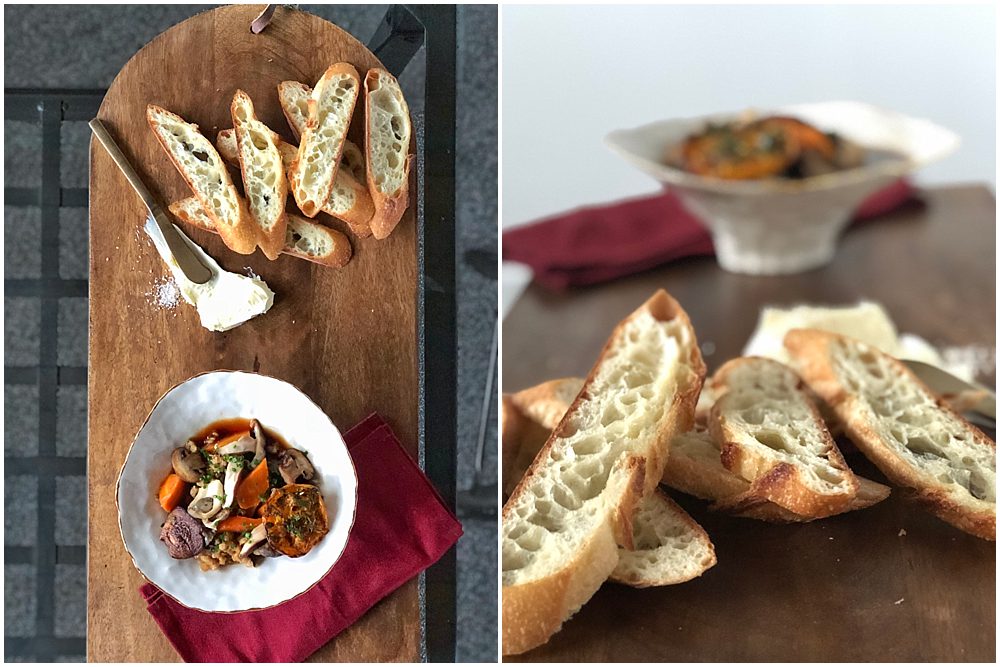 Mushroom and barley cholent (meat-free!) served with bread, a swipe of butter and a dash of salt

Jewish food is as diverse as the national and ethnic makeup of its people—it’s a representation of the diaspora. On one end of the geographical spectrum is Sephardic Jewish food, eaten primarily by Mizrahi Jews. These are dishes with roots in the Mediterranean and Middle East, as well as Spain and North Africa. Because those cuisines are often already centered around vegetables, it’s easy to create a Sephardic vegan Rosh Hashanah plate. For a filling base, choose couscous cooked in vegetable broth with onions and garlic, and top with traditional chickpea hummus (legumes are a staple of the celebration) and roasted fennel. A light and bright Israeli salad is naturally plant-based—add fresh chopped carrot into the mix for increased blessings in the coming year. Nearly all of the symbolic foods of Rosh Hashanah—carrots, beets, gourds, dates—are fruits and vegetables, making it easy to put together a plant-based Sephardic dinner that’s still steeped in tradition. 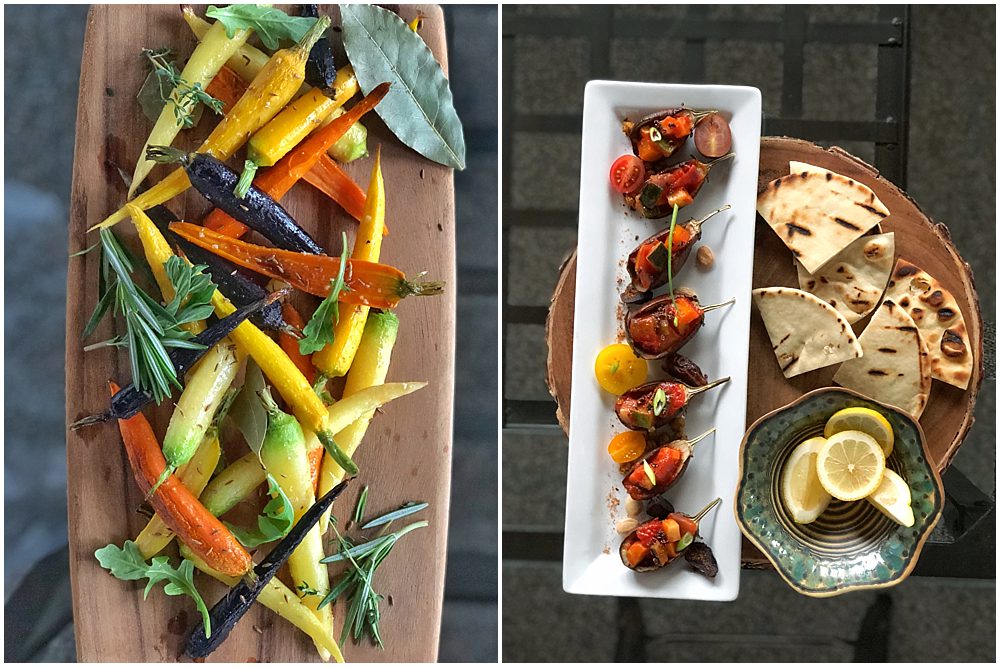 On the other end of the diaspora is Ashkenazi cuisine, which is rooted in Eastern European countries such as Poland, Russia and Hungary. Because colder climate and rough land of those regions, Ashkenazi cuisine naturally relies less on vegetables and vegetable oils and more on meat, fish and animal fats. Traditional Rosh Hashanah dishes include potato latkes, cholent, noodle kugel and kasha. These holiday dinners often heavily feature egg and butter, as well, but there are easy modifications that will modernize the dishes and make them more accessible to more guests at the table. For example, lightly coat the buckwheat groats in oil instead of egg before toasting for similarly fluffy kasha varnishkes. For vegan potato latkes, use flour and a touch of cornstarch to bind instead of egg. Tzimmes is an Ashkenazi Rosh Hashanah tradition that’s typically already vegan. The stewed mixture of yams, carrots, apples and dried fruit is sometimes enriched with butter, which is replaceable by oil, and sweetened with honey, which is replaceable by date syrup. The key component of the dish is the carrot, anyway, because it symbolizes abundance in the new year. 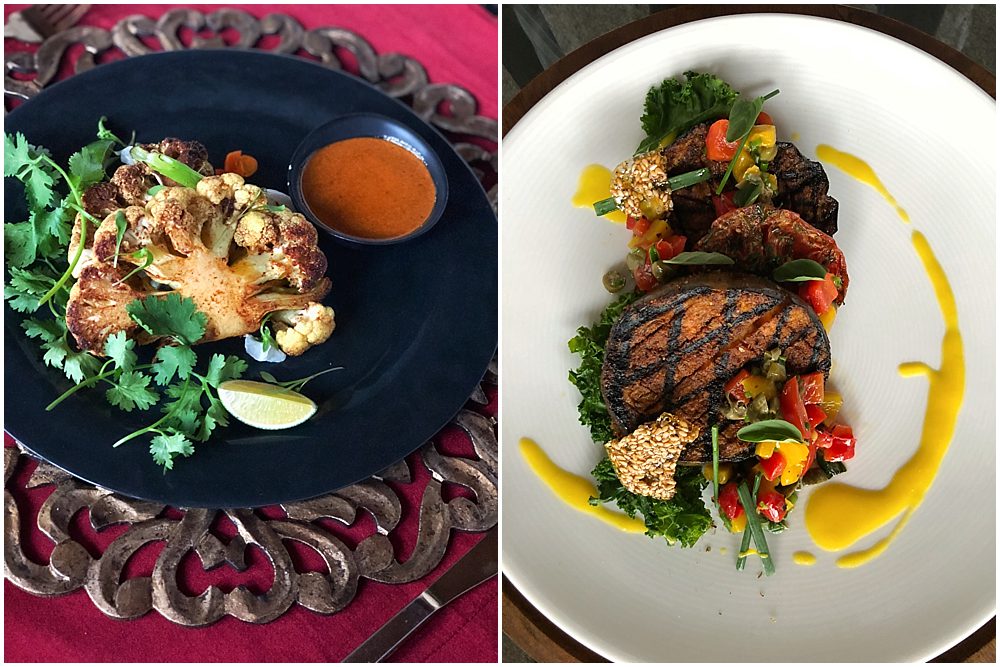 One of the cornerstones of the this holiday feast is honey. Honey-dipped apples and bread represent wishes for a sweet new year. One easy bee-free alternative is date syrup (also called date honey), which is a reduction of the sweet, bready Middle Eastern fruit.

Many Rosh Hashanah tables will include the head of a fish, which symbolizes us collectively “heading” into the new year, as well as represents our hope for leadership and guidance. For those who don’t consume fish, a head of lettuce can easily replace this element. While the taste and texture is obviously nothing like fish, the “head” holds the same sacred symbolism.

Many of the other symbolic items are fruits and vegetables that can prepared and enjoyed in myriad ways. Pomegranate seeds are another sweet treat that represents our wishes for a year of abundance! We eat pumpkin in hopes of joy, green beans for prosperity, and leeks for friendship and good company.

When it comes down to it, the true importance of the Rosh Hashanah feast isn’t the food itself, but the gathering of family and friends. In between the traditional Matzoh balls, warm challah, crystal chalices and gleaming heirloom passing trays is the self reflection, familial camaraderie, and lifelong memories-in-the-making that make the celebration special

For more modern Jewish holiday food, take a look at our new Jewish celebrations menu here. To find some of the standout dinnerware and serveware featured in the photos, be sure to visit our online EC Home Store.