Kicking Off the New Year with All Things Green: Meet Rabbi Lauren Henderson of Mishkan Chicago

Today, we’re talking the growing trend towards vegan Jewish food with a local Mishkan rabbi. Mishkan is a modern spiritual Jewish community in Chicago that meets for soulful musical prayer, learning and holidays in synagogues, homes, event venues and other religiously unconventional spaces all around the city. Mishkan Chicago brings spirit, song and celebration to traditional Judaism and creates meaningful connections and community.

We caught up with Rabbi Lauren Henderson during this spiritually transformative season of the Jewish High Holidays. We interviewed her about the connections between food and spirituality, and whether the global trend toward lighter more plant forward Jewish food has any Biblical basis.

Here’s what Rabbi Lauren had to say. 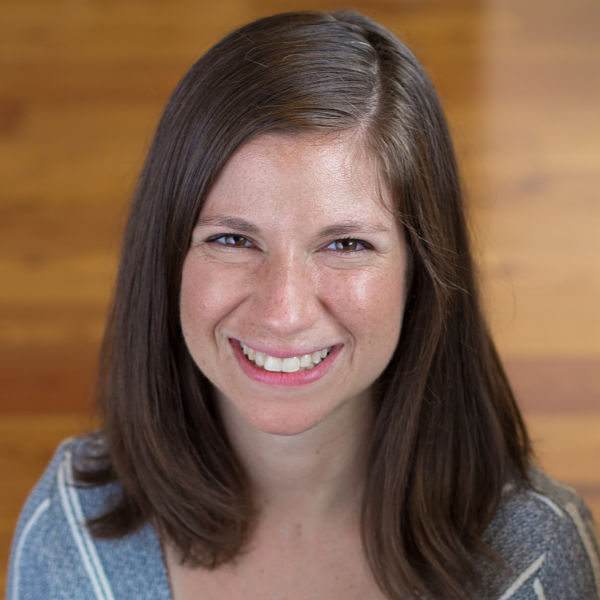 Can you speak a little bit about the importance of food in Judaism, both in a religious sense and a cultural sense? How do food and spirituality intersect, specifically in the Jewish faith?

Rabbi Lauren: I remember hearing pretty early on when I was growing up at my synagogue that all Jewish holidays could be summed up in 9 words: “They tried to kill us, we won, let’s eat.” This seemed pretty funny as a kid, but as an adult, I was looking for a spirituality that went deeper, and an approach to Judaism that wasn’t based on gorging ourselves on mounds of latkes in response to generations of trauma.

RL: “Jews and food” can be traced back all the way to the Garden of Eden. Eve, the first woman, sees this luscious, beautiful fruit hanging from the tree in the center of the garden that had the power to open our eyes and make us more like God. This fruit opened the pathway to wisdom and discernment, and with her first bite, she set a course for every human being to come after her. She taught us that the choices we make around what we eat have tremendous power – it’s an act that we usually perform mindlessly, but when done intentionally, eating can be a profound spiritual practice, bringing us closer to the earth and the creative processes that brought all of us into existence. 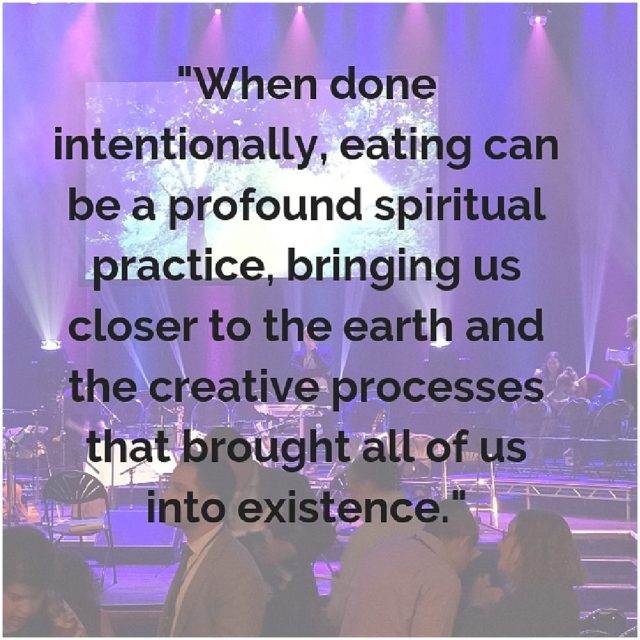 How do you see traditional approaches to Jewish food shifting or changing? Are we just now moving away from the Eastern European influence of meat-based dishes or has a vegetarian approach always been accepted?

RL: Some streams of Judaism emphasize the rules and regulations of what to eat – what we call the laws of Kashrut, literally the “fitness” of foods. Basically, these fall into three categories, all of which are predicated on a meat-based diet: foods (like pork and shellfish) that are completely off-limits, animals that must be ritually slaughtered (“schechted”) in a certain manner in order to be kosher for eating, and the prohibition on eating milk and meat together.

RL: Other rabbis say that right from the start of humanity, the ideal world that we inhabited in the Garden of Eden set forth a model of a plant-based cuisine that all Jews should aspire to. It wasn’t until a few chapters later in the Torah, during the age of Noah’s ark, when God offered a concession to our meat cravings by proposing the beginning of a system for obtaining meat ethically. And today, there’s a huge movement for Eco-Kashrut – trying to go a number of steps beyond the milk and meat regulations to ensure that the food we’re eating is sourced sustainably and that we’re being mindful of the waste that we’re producing. Check out Hazon: The Jewish Lab for Sustainability, for lots more info on ethical Jewish food choices – they’re really at the forefront of this movement in the Jewish world today. 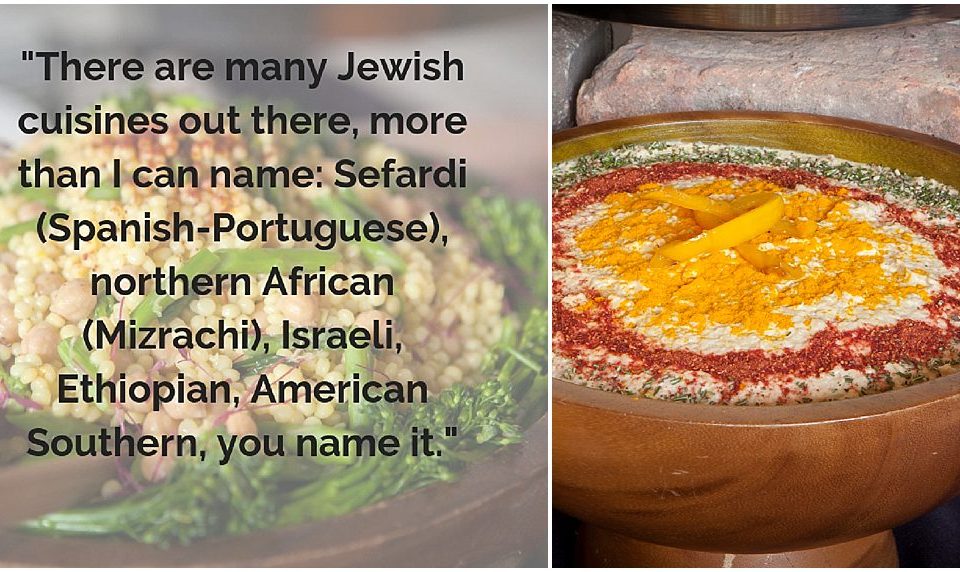 How does Mishkan, which serves mostly vegetarian meals (save for brisket) strike a good balance between traditional Jewish foods and the dietary/health needs of the community?

RL: We knew that vegetarian meals would satisfy a number of the values in our community: healthy, sustainable, kosher-friendly, cost-effective, and plant-based. With a community as diverse as ours, with folks from such a wide range of backgrounds, we wanted to be able to provide high quality food at our Jewish experiences that would meet the needs of as many community members as possible. We do provide meat, occasionally, but luckily there are a ton of traditional Jewish foods that are vegetarian as well.

RL: We’re also cognizant that the definition of “traditional Jewish food” is expanding. Jews come from all sorts of backgrounds and cultures, not just Eastern European/”Ashkenazi.” So while brisket, knishes, and stuffed cabbage might be traditional for some folks, there are many other Jewish cuisines out there, more than I can name: Sefardi (Spanish-Portuguese), northern African (Mizrachi), Israeli, Ethiopian, American Southern, you name it. One of our community members, Dylan Maysick of Diaspora Dinners, has been preparing meals here in Chicago that explore the food and cuisine of the Jewish diaspora – check them out! 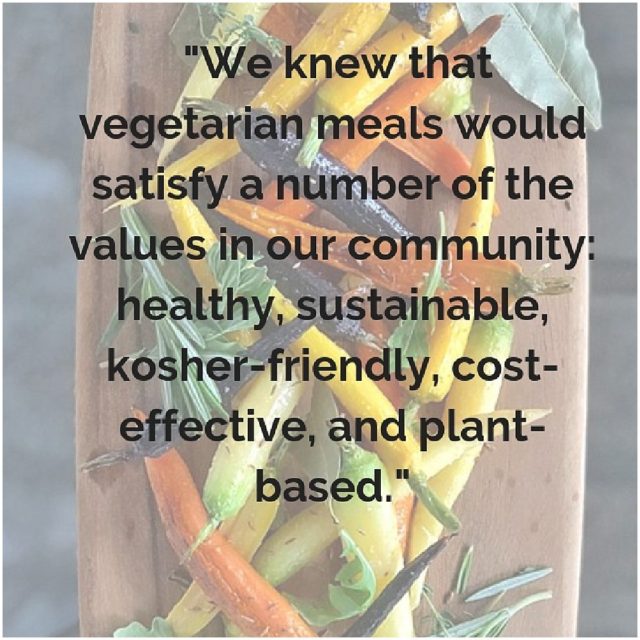 How do Kashrut/Kosher guidelines affect plant-based diets or plant-based eating for observant Jews?

RL: When I started keeping kosher over a decade ago when I went off the college, I went fully vegetarian for the first four years – it makes things super easy! No separate dishes to worry about. If you follow a plant-based diet as well as the stricter side of kosher guidelines, you’ll want to note that many ostensibly vegetarian items on menus contain meat-based broths or garnishes, and depending on how forthcoming the restaurant is on their menu, they may or may not mention this special “additions.” In very strict circles, the kosher kitchens pay close attention to leafy vegetables, like kale or broccoli, where little bugs (not kosher) might hide in between the leaves – and they’ll either go through a triple mega washing, or just avoid those vegetables entirely.

RL: Luckily, all meat and dairy replacement items are totally fine! So you could have a completely kosher “cheeseburger” with a black bean patty and real cheese, or with a beef burger and cashew cheese, and enjoy to your heart’s content.  And in fact, Jewish legal experts like the dean of my rabbinical school, Rabbi Danny Nevins, have begun to explore the kashrut status of cultured and lab-grown meats – check out his work here. 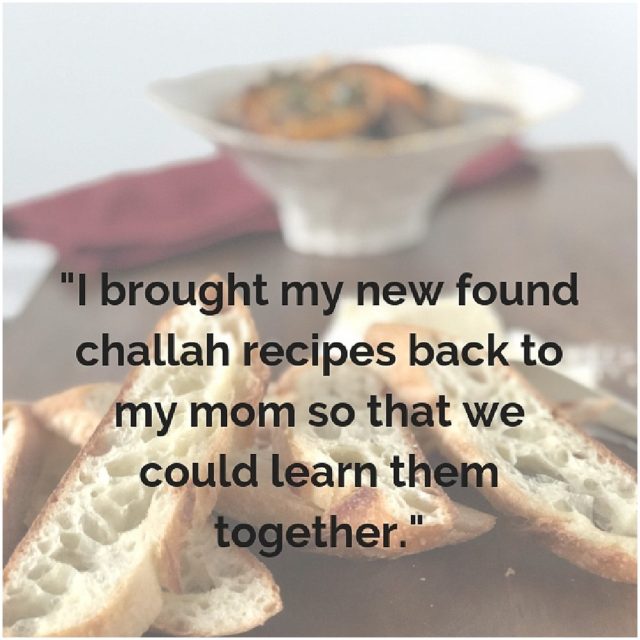 Being from the South, what sort of food traditions did your family participate in? How do those differ from the way you eat or approach food now?

RL: SO different! I didn’t grow up keeping kosher in the slightest – my grandmother, who wasn’t Jewish, would make lard-filled ham biscuits as a Sunday morning treat. My family tried to rediscover our own ties to traditional Jewish foods, and after I spent a few years in rabbinical school, I brought my new found challah recipes back to my mom so that we could learn them together.

What were the also vegetarian options and plant-forward Jewish communities like in South Carolina? Are they more common in Chicago? Or do you find it’s a growing trend across the country?

RL: Vegetarianism was pretty rare where I grew up in SC – it’s far more prevalent in Chicago. I remember going home once to SC after I had recently started keeping kosher, and I ordered a tuna salad sandwich at a restaurant because it was the only thing that I thought I could eat. When my sandwich came out, the tuna salad was full of bacon bits! I’m sure that for the southern chef in the back, they thought that they were only improving my lunch!

Learn more about Rabbi Lauren and Mishkan on the Mishkan Chicago website. Find modern plant-forward ideas (more vegetarian and vegan Jewish food!) on our new Jewish holidays menu. To meet another member of the EC creative tribe, check out our profile on Chicago florist Cornelia McNamara.