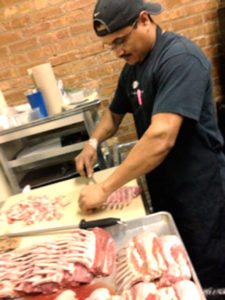 Brooklyn, Chicago, why make the comparison? If Brooklyn is the self reliant, authentic, “get it done” part of New York, then Chicago is the broad shoulders, swaggering, “no substitute for the real thing” part of the Midwest. Brooklyn/Chicago it’s the REAL Deal.

When I think of Brooklyn, the BUTCHER is the first image that pops into my head. An icon for sure. Not the guy behind the “meat department” at the chain grocery store but the man in a bloodied, white coat that demands your order. You specify the cut..and they make it happen…usually customizing it right before your very eyes. House -made spicy fennel sausage, thick pork chop, thin veal cutlet, you’ve got it. 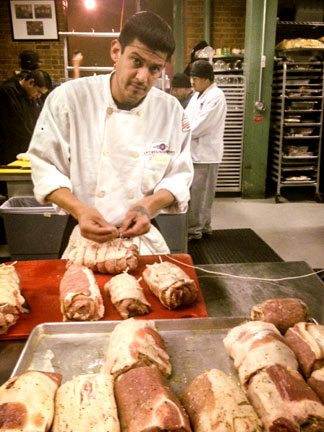 And then in Chicago, you’ve got Entertaining Company. We’re lucky enough to have two skilled butchers on staff Juan Rodriguez and Gabino Perez.

Both hail from Michoacán, Mexico where they grew up butchering in their local shop since their teens. They’ve both been wielding the knife at Entertaining Company for more than a decade.

6:30 AM sees Juan and Gabino arriving at our West Loop kitchen, getting ready for a day of breaking down meat, followed by braising, marinating and grilling,
and roasting their work. Short ribs, rack of lamb, goat and the occasional suckling pig are at their hand.

Yes, Juan and Gabino, you make it happen. There is just no substitute for freshly butchered meat, customized cuts that deliver EXACTLY what our guests want. Personalization and REAL BUTCHERS are a part of our culture~especially in the kitchen.