Here at Entertaining Company we are constantly trying to find new interactive ways to engage our clients around our interest in food. Recently, sales consultant, Kenny Woodman worked with a law firm client whose goal was to provide a fun ice breaker for summer interns . Kenny suggested a TopChef activity. For this event, the summer law interns were divided into teams for a cooking face off . Each team was given a box of mystery ingredients, put together by our EC chef. The task was to use all the ingredients in the box as well as a secret ingredient given to the interns by a senior associate at the firm.

The mystery boxes that were put together in the Entertaining Company kitchen had a wide variety of foods ranging from lamb to purple broccoli, to coconut and Brazilian fish. Soon-to-be lawyers put their aprons on and got to work. This exercise allowed for team bonding, building leadership skills, and a fun day in the office. As the interns worked, associates throughout the firm came down to enjoy hors d’oeuvres and cocktails and watch the interns. It was a great way to showcase the wonderful company culture that the law firm shares.

After an hour and a half, the teams were forced to set down their utensils and present their plates to the judges. The three judges were two associates at the firm and our chef. The judges each had their own plate to test for each team and were able to provide some feedback as they judged. One team even went the extra mile as to print out menus and play some music while the judges sat down for their meal. Entertaining Company had a great time watching the interns turn the interesting mystery box of ingredients into a meal. The judges looked at a lot of various aspects in order to determine the winner such as how the proteins were cooked, how the food was presented, and how the teams decided to use all their ingredients; including the mystery one!

Team 1 was overwhelmed with excitement when they were announced the winners of the law firm TopChef with their ginger lemon chicken dish, paired with potatoes, green cauliflower, sun dried tomatoes and a coconut filled with mixed fruits. The judges stated that this was the best dish overall because the chicken wasn’t dry or overcooked and the sides went well with how the chicken was prepared. Both the law firm employees and Entertaining Company had a great time at this event. It was exciting to see everyone come together for some in-office fun! 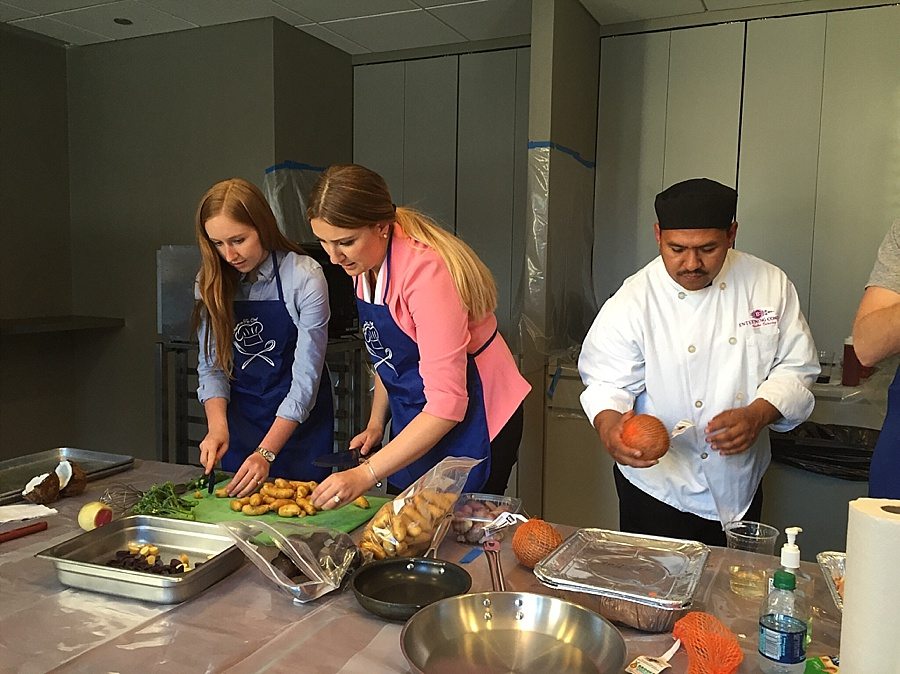