Discovering regional flavor profiles, especially those showcased in Middle Eastern and Mediterranean cuisine can be overwhelming. What to eat!?

Everyone needs a crib sheet now and then…here’s yours.

A Mediterranean and Middle Eastern Menu.*

BARBERRY A tiny red berry; tart like a cranberry.

FESENJAN Iranian Stew often made with duck or chicken, containing pomegranate juice and ground walnuts.  It is sweet or sour and always served with rice.

FIDEOS Vermicelli noodles that have been crushed and toasted.

KADAYIF A crust made from vermicelli noodles.

KOFTA Meatballs made from a spicy mixture of lamb, beef, veal, and pork.

LEVANT Countries bordering on the Eastern Mediterranean Sea from Turkey to Egypt. 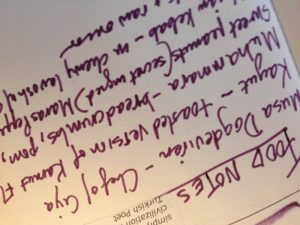 PILPELCHUMA  An intense ancho-chili, cumin, and garlic paste used as seasoning by the Jews of Tripoli.

*Have you seen an ingredient or dish in a Middle Eastern or Mediterranean restaurant that’s stumped you?  If so, tell us about it in the comments section and we will explain what it is to you!